The 2016 MMU (Millinery Meet-up) hosted a hat competition that had about 60 participants.  It was sponsored by Hat Blocks Australia, and yes, they did in fact show up with hat blocks all the way from Australia to the MMU marketplace!  Since they sponsored the competition, the theme of the hat competition was Australiana.  What is your impression of Australia?

I was thrilled to take on this challenge, and decided to sculpt my version of the Sydney Opera House.  Once sculpted, I blocked my felt over it, wiring it into place, and positioning it atop a button block.  The Sydney Opera House is so iconic, and I opted to dress it in a vivid red multicolored silk, to represent both the diversity of the country as well as the red landscape.  Last, I added the dangerous element of echidna (porcupine) quills.  Echidna is the Australian version of our porcupine, and represents how in Australia plants and animals all seem to have an element of danger to them, with bigger spikes, more poison and are simply poised to kill you. 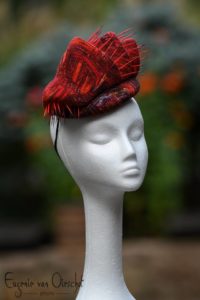 My submission to this gallery had to be carefully housed in a specific heavy leather carry-on bag, and each time it went through security screening in airports I held my breath and crossed ALL my fingers and toes!!!  I mean, no knitting needles and they are going to let me travel with porcupine spikes??  Thankfully nobody batted an eye… 🙂 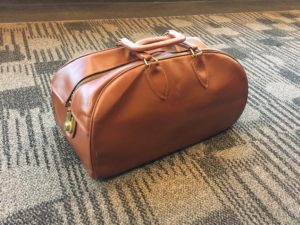 The judges of this anonymous contest were the instructors of the courses.  There were several award categories.  The submissions were incredible.  Many people went to the gallery repeatedly, to take in all the amazing headwear/wearable art.  On the day results were announced, we all paraded our hats into the lunch hall, so that people could see which hat belonged to which maker.  Awards began to be handed out… 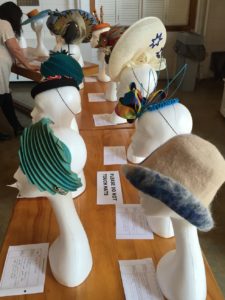 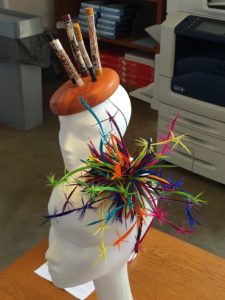 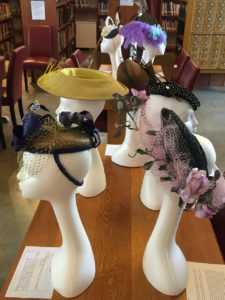 Beyond my expectations, I was deemed to have the Best In Show hat, or Best Overall hat at MMU!!!  I was thrilled (and astounded).  I was also told that I’d won most popular hat, but that they rolled that award into Best Overall hat as well!  A quick lunch, and some photos later, I was on top of the world.  🙂  Then, of course, back to the last half day of coursework before the event was over.  It was during the last day that one of the instructors fessed up to having stabbed herself with my hat!  Having impaled a quill in my finger while making this hat, I totally sympathized, and of course laughed really hard! 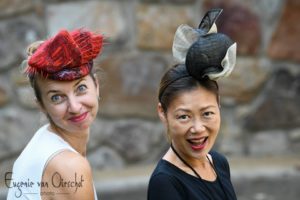 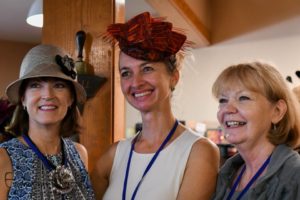 MMU was a great week, and even better for me as an affirmation of the path I’ve taken.  Great friends, new acquaintances, and a lot of new knowledge to do me for two years…until the next gathering.

(If you ever want to discuss MMU, I’m more than happy to chat about it!)

About the Author: Trish Raine

More hats to be loaded onto my site soon! Please check back, or if you can't wait, just email me what you're looking for! :)